The final installment of the Teaville Moral Society is out and you can get it most anywhere now!

BLURB: In early 1900s Kansas, Mercy McClain, determined to protect Teaville’s children from the bullying she experienced as a child, finds fulfillment working at the local orphanage and serving on the school board. When Aaron Firebrook, the classmate who bothered her more than any other, petitions the board for a teaching position, she’s dead set against him getting the job.

Aaron knows he deserves every bit of Mercy’s mistrust, but he’s returned to his hometown a changed man and is seeking to earn forgiveness of those he wronged. He doesn’t expect Mercy to like him, but surely he can prove he now has the best interests of the children at heart.

Will resentment and old wounds hold them back, or can Mercy and Aaron put the past behind them in time to face the unexpected threats to everything they’re working for?

If you haven’t yet read
the first book in this series,
A Heart Most Certain is still
on sale for

I thought I’d give you a hint of what I’m working on next!

My next series will be set in Wyoming, and here is a SNEEK PEEK at the cover for the first book in the series!

You’ll have to wait awhile before you see the rest, but let me tell you, I’m in love!

There are four stories in Hearts Entwined, and mine is called “Tied and True.” If you’ve read A Love So True, then you know who Marianne and Calvin are. This is a simultaneous novella with that book, so you can now see what happened behind the scenes!

Here’s the blurb: Wealthy Marianne Lister is in love with business assistant Calvin Hochstetler, but he can’t see past the difference in their social status. When Marianne takes a job to prove that she is prepared for a life of hard work alongside the man of her dreams, will it be enough to convince Calvin to risk it all for love?

Add Hearts Entwined onto your GoodReads To Read List

This summer I went on a research trip for some upcoming books. And what I wanted to do most was go on a stagecoach ride, but not one that drove on paved streets or was a replica meant for tourists. No, this one was off road on an actual part of an old mail line, in a coach refurbished with historical accuracy in mind, and the driver purposely spent a bit of time going at the highest speed they would have driven to show us what it was like…..

Oh my goodness, no wonder people were so excited about the arrival of trains! There is nothing romantic about a stagecoach ride, and definitely no cross country reading happening to that poor soul crossing the country in a stagecoach. It was so bumpy I knocked my head twice, we had to sit my four year old between two adults for the very real concern he’d fly out, you couldn’t really see the pretty countryside pass by because the windows and rolled up oilskins made it so anyone taller than a child would have to duck to see out. We rode with one other family of four and it’s cramped, and we went on a drizzly day so we didn’t come out clean. Plus the smell of the horses doing as they do….

You can see how bumpy the ride is in the picture below. The leather suspension is not there for the comfort of the riders, but the horses’! I have an SLR camera, so there is no lag time between pressing the button and taking a picture, but it couldn’t take a single picture fast enough to catch us between bumps and it was only possible to take a picture when we were going slow (about 5 mph), because when we got up to top speed (about 15 mph at full run) there was nothing to do but hold on and try to keep from bumping your head against the carriage. Being so bumped around at 15mph sounds insane when we can now glide down a freeway at 75mph. The four year old with the worried look sitting between us was not exactly certain why we’d chosen to get on this ride….

Over Christmas break on the long drive to see family, I read Missing Isaac by Valerie Fraser Luesse. A departure from my normal romance focused reads, but I enjoyed it very much (and thankfully there were two small romance threads to keep me ultra happy though they weren’t the focus of the book, but the hero in the older romance? Be still my heart.) The author writes for Southern Living magazine and you could almost taste the southern in this book. If you like to feel as if you’re in a real place with real characters, try this one out. If you’d like to read an interview with the author, read the blurb, and get thrown into the giveaway hat for this book, visit my Inspirational Historical Fiction Index before the 16th to do so!

Visit the Index and Enter the Missing Isaac Giveaway!

If you’ve been a subscriber to this newsletter for awhile, you’ll know the last time I mentioned Edenbrooke, I gushed.

Well, it took me forever to get around to reading Blackmoore. Some reviews had mentioned that it wasn’t at all as fluffy and nice as Edenbrooke, so I waited to get it from the library and had been in no hurry.

Well, it was so good! Silly reviewers! I put it straight on my Epiphany list because I had to have it on my shelf!

So if you haven’t read these two and love a good romance, don’t wait!

And if you were wondering why I’d put Blackmoore on an Epiphany list, it’s because my family does our big holiday fun on Epiphany instead of Christmas since we have to travel plenty during the December holidays.

So on the night of January 5th, we hung up our decorated stars and put our boots outside to freeze so this year’s wise men would know we were awaiting them, and they filled up our boots with edible goodies and pillowcases with books and gifts. My pillowcase had Blackmoore tucked inside….those wise men are so good to me. ;P

I am so excited to show off the TWO covers I’ve just been given permission to show off!  If you are a fan of Karen Witemeyer, Regina Jennings, or Mary Connealy, you may have gotten a peek at the first cover, but I have a special one all my own! Both stories are Teaville Moral Society Stories!

The first is a novella about Marianne and David….It’s my first ever simultaneous story. It happens on the same timeline as A Love So True. It doesn’t matter which one you read first, but if I were choosing, I’d choose to read Tied and True after A Love So True because it feels like a behind-the-scenes story you find in a DVD’s extras. 🙂 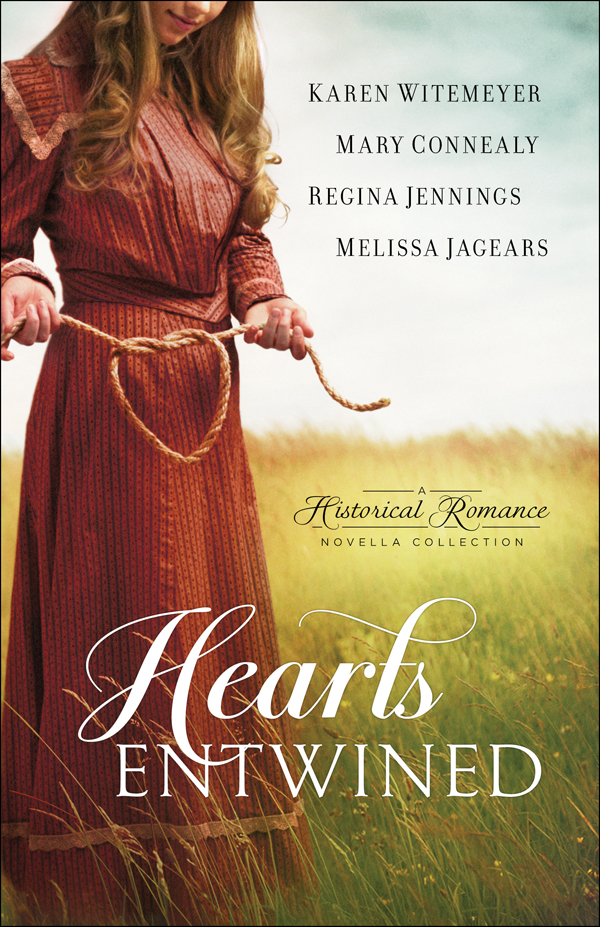 The path to love is filled with twists and turns in these stories of entangled romance with a touch of humor from four top historical romance novelists! Includes Karen Witemeyer’s The Love Knot, Mary Connealy’sThe Tangled Ties That Bind, Regina Jennings’s Bound and Determined, and Melissa Jagears’s Tied and True.

Each one of us wrote a story to highlight how love gets us all tangled up! I had a blast writing an heiress pursuing the man her heart was tied to, but when he hesitates because of their socially unequal standing, she’s determined to show him how strong their bond could be. This one is set in Kansas City, but concern for the less fortunate is still highlighted with these cameo characters from the end of A Love So True.
Hearts Entwined Releases January 2, 2018!
Put Hearts Entwined on Your Goodreads To-Read Shelf
For those of you who have asked who the next heroine is, I’m happy to say it’s Mercy! 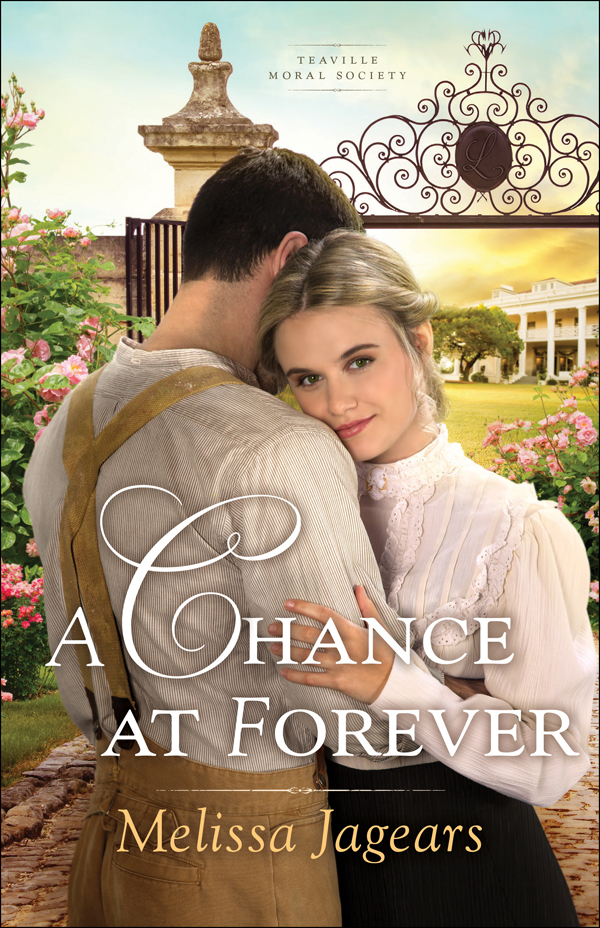 Mercy McClain joined the school board to protect the children of Teaville, Kansas, from the bullying she experienced as a child. When the worst offender from her school days applies for a teaching position, she is dead set against it. Yet Aaron Firebrook claims to be a changed man. Can he earn Mercy’s trust–and her support for the challenges to come?

And for those who may be disappointed the next heroine isn’t Sadie or Caroline, do not fear! I don’t neglect them. 🙂

A Chance at Forever Releases March 6, 2018
Put A Chance at Forever on Your Goodreads To-Read Shelf
I have some of the greatest fans….or rather people who just like the same kind of books I do! 🙂 Thanks to each and every one of you who read, review, and share with like-minded readers! I thought I’d share a few highlights of A Love So True floating about the internet that made me happy and might interest you to jump on over and take a look! 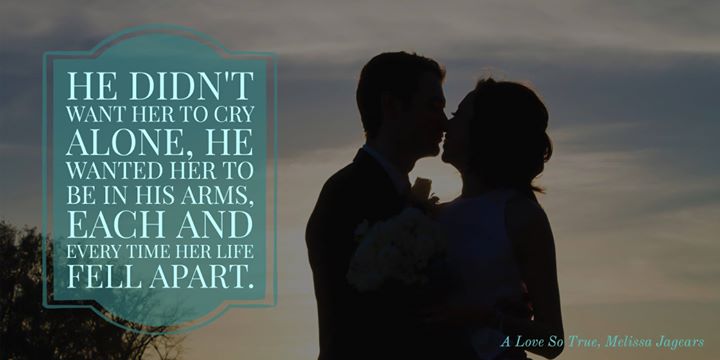 David is quite the smooth talker, even in his own head. 🙂  ~Meme by Julie Jobe~ 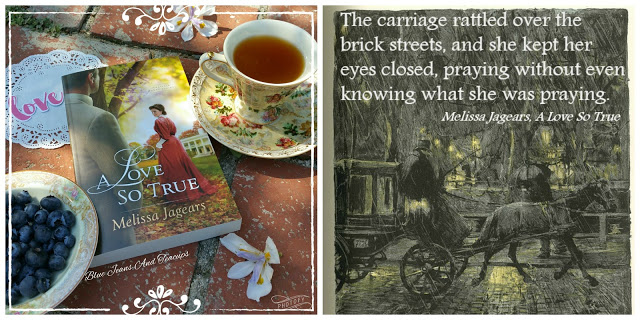 Is that not the most artfully arranged book picture ever? You just can’t have a Teaville book without tea!
Visit the blog, Bluejeans and Teacups, to read a review and check out Heather’s lovely corner of the internet.

My very first review for A Love So True just appeared:

“A Love So True is a historical fictional tale of a young woman who is a selfless, hard working advocate for orphans and the down and out. She is a member of the Teaville Moral society who aids in ministry for those who are in the most needy of circumstances. She has caught the eye of a very handsome and wealthy businessman but continuously seems aloof and has tall walls built around her heart that makes her all the more appealing to David. This was a bit frustrating to me at first, because I’m thinking what? Are you crazy? David is handsome, rich, loves the orphans and willing to aid in all of her causes. Plus, he can COOK!! What is she thinking?! Thus, the twist. You’ll have to read it and believe me it was amazing!! The ending was like WOW!!! His precious and loving kiss would make anyone swoon. (I could have used the fainting room) Needless to say, I highly recommend this book.”

And what’s double exciting for this week, A Heart Most Certain made the shortlist finals for the INSPY awards! Thanks to my readers for nominating me into the longlist! Doesn’t she look good in that excellent pile of authors?

Faith & Life Bookstore in Newton, KS held an author signing and finagled an entire box of A Love So True before it was even supposed to go to print. I got to see it for the first time Saturday and had a lovely signing with Deb Raney and Kim Vogel Sawyer. 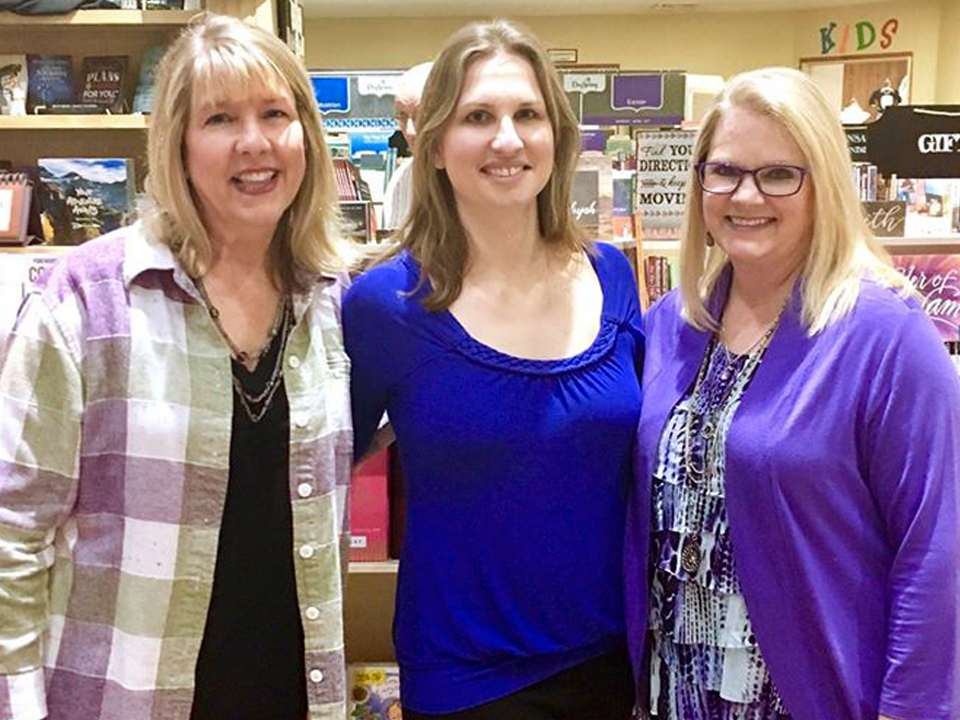 I had to buy one for myself! Doesn’t it look pretty up on my shelf? 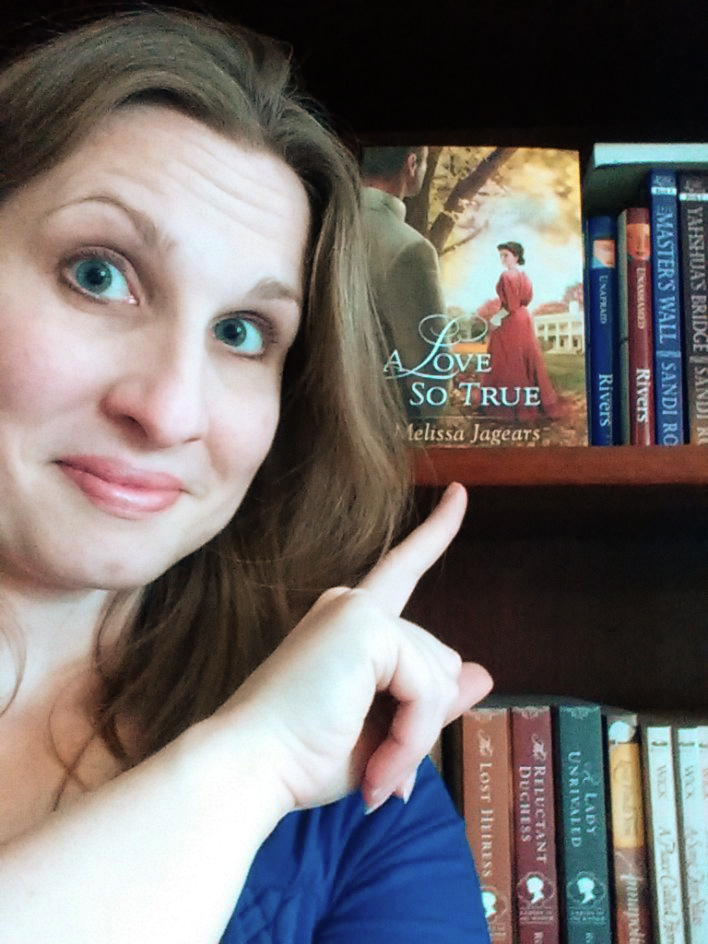